It’s very rare that I go to the movies for several reasons, but, as luck have it we had an opportunity to go last Friday night. Date Night!

It’s been awhile since we have had that. I picked the food and Jeffery picked the movie.

Well, when you let a guy pick a movie we all know that’s going to end up being anything with adventure and things that blow up. What better movie to pick then Jurassic World, yay! (insert sarcasm)

I’m just kidding. It was fine and I think it’s worth watching even if dinosaurs are not your thing.

I did stumble across a fashion problem however. Well most of you problem wouldn’t call it that.

Probably silly to some but it made me think a little. And it kept my interest during the entire movie. As I was watching I noticed Bryce Howard’s outfit was all white with neutral heels. 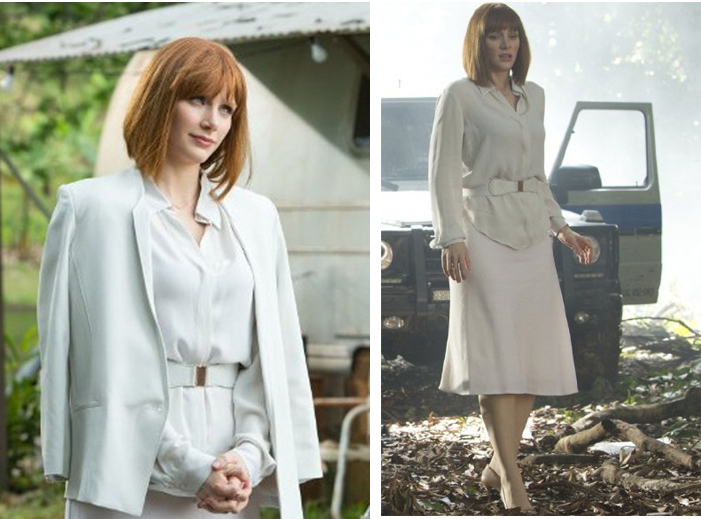 She wore this outfit throughout the entire movie, even the heels. It kind of bothered me a little because I wanted to know the meaning behind that.

I thought maybe it symbolized something or that it was a bad fashion call from her stylist or herself. She was very corporate in this movie so I understand the attire in the beginning of the movie but not so much throughout.

I promise, I did enjoy the movie but I was so fixated on Bryce walking/running around in a jungle with her all-white outfit on, (and it really didn’t get dirty until the very end) never once taking her 3-inch nude heels off, while being chased by large and I mean large dinosaurs.

What in the Sam Hill was she or the stylist/producer thinking allowing her running from dinosaurs in 3 inch heels? If anyone has a great answer to that please let me know.

I turned to Jeffery and asked his thoughts. He looked at me like I was crazy. (insert crickets)

I will say, Bryce looked stunning in this movie. Minus the confusion of the outfit. But, here’s the thing. I got all fashion conscious.

With my mind wondering (yes I should have been focusing on the movie and the gorgeous Chris Pratt… I still love you Jeffery),  I decided to partake in a little research.

Inquiring fashionistas want to know. And just so you know folks, I am not the only one wondering about this fashion quandary. I found many other people, not naming names, curious about the same thing.

I will admit I felt some relief when I found out that it wasn’t just me. And I wasn’t the only one focused on this all white dress issue.

1.) She wanted to keep her feminism and show that she could still be strong and fierce. Makes sense, still can’t get past the all white and heels though.

Here is something I found in one article on zap2it.com.

During a press conference, Howard admits to reporters that during her wardrobe fittings she did ask if she could wear boots, but the costume designer would say Claire would “look too protected.”

The way the actress describes it, she came around to “Jurassic World” telling the story of a character “who starts off so pristine in heels and fits in a corporate environment but not at all a jungle environment” ending up in the jungle, and having what seemed like a weakness be something that didn’t hinder her.”

2.) Maybe she wanted to make her character a bit different than all the other main leading female characters. But, was that still necessary?

Could she had thrown on a pair of white pants and white shirt with boots? I might have accepted that a little bit better than the heels, skirt, and white blouse.

Or why not just stick with the whole jungle theme, camo. khaki, etc.

Finally…. a little dirt and she did tie her blouse.

I know this is so silly and I realize that I drove Jeffery crazy the entire time in the movie theater hoping that she would change into something a bit more comfortable and jungle friendly. I mean really folks, who runs from giant dinosaurs in heels and makes it? Seriously?

In the end after reading all the hoopla about the dress attire for Bryce’s character Claire, look what kind of attention it got. Well played producers and all those involved in this movie well played. You got our attention, who would of thought that Chris Pratt and dinosaurs would have been the last thing to draw our attention to this action packed filled movie.

I guess it makes me feel better about the obsession I had over this all white and running in heels thing.

Note to my fashion friendly friends and bloggers – If I’m ever in a jungle there better be a nice beach and a cabana boy nearby bringing me my favorite cocktail along with the ocean breeze blowing through my hair.

I will probably not be wearing all white, but I can assure you, I will have the perfect attire on and it will not be questioned, LOL!

I will say it was a really good movie minus my clothing distraction. If you have seen this movie, let me know your take on this. This Southern Stylist would love to hear it.

Get exclusive access to all of my fashion secrets, style tips and wardrobe makeovers.

I'm a stylist focusing on fashion that is low-cost and accessible to every woman. I live in Montgomery, Alabama with my husband Jeffery and son Dillon.

Hi. My name is Laura Handey and I love writing about fashion and styles for "real" people.

I'm known as the Bargain Fashionista with a Southern Twist on Style.

more about me (and you!)

Be sure to subscribe to the blog so you can get all the latest budget-conscious fashion tips in your inbox!

I provide in-home style consultations as well as long-distance fashion advice via Skype or Facetime.